Finally I can apply a walk-forward analysis!

After months, I’ve finally been able to do it. I now show how. But first, some background. (The next section was originally published in this post.)

Data scientists want to fit training models to data that will do a good job of predicting future, out-of-sample data points. This is not done by finding the model that performs the best on the training data. This is called overfitting; a model can appear to do well on training data but will not generalize to out-of-sample data. Techniques need to be applied to prevent against it.

A data scientist may first split her data set used for developing a predictive algorithm into a training set and a test set. The data scientist locks away the test set in a separate folder on the hard drive, never looking at it until she’s satisfied with the model she’s developed using the training data. The test set will be used once a final model has been found to determine the final model’s expected performance.

She would like to be able to simulate out-of-sample performance with the training set, though. The usual approach to do this is split the training set into, say, 10 different folds, or smaller data sets, so she can apply cross-validation. With cross-validation, she will choose one of the folds to be held out, and she fits a predictive model on the remaining nine folds. After fitting the model, she sees how the fitted model performs on the held-out fold, which the fitted model has not seen. She then repeats this model for the nine other folds, to get a sense of the distribution of the performance of the model, or average performance, on out-of-sample data. If she needs to specify hyperparameters (which are parameters that describe some higher-order aspect of a model and not learned from the data in the usual way other parameters are; they’re difficult to define rigorously), she may try different combinations of them and see which combination lead to the model with the best predictive ability in cross-validation. After determining which predictive model generally leads to the best results and which hyperparameters lead to optimal results, she trains a model on the training set with those hyperparameters, evaluates its performance on the test set, and reports the results, perhaps deploying the model.

For those developing trading algorithms, the goals are similar, but some key differences exist:

I’ll talk more about how we could evaluate a trading system later; for now, let’s focus on how we can apply the idea of cross-validation analysis.

(Illustration by Max Kuhn in his book, The caret Package.)

For time-dependent data, we can employ walk-forward analysis or rolling forecast origin techniques. This comes in various flavors (see the above illustration), but I will focus on one flavor. We first divide up the data set into, say, ten periods. We first fit a trading algorithm on the first period in the data set, then see how it performs on the “out-of-sample” second period. Then we repeat for the second and third periods, third and fourth periods, and so on until we’ve run to the end of the data set. The out-of-sample data sets are then used for evaluating the potential performance of the trading system in question. If we like, we may be keeping a final data set, perhaps the most recent data set, for final evaluation of whatever trading system passes this initial test.

Other variants include overlapping training/testing periods (as described, my walk-forward analysis approach does not overlap) or ones where the initial window grows from beginning to end. Of these, I initially think either the approach I’ve described or the approach with overlapping training/testing periods makes most sense, and fortunately these can be applied using backtrader.

The first step in a walk-forward analysis is splitting the data. I initially hoped that the TimeSeriesSplit class provided by Scikit Learn would do this, but this class provides only one data-splitting scheme (corresponding to the lower-left corner of the above illustration by Max Kuhn), and it was not the scheme I wanted. In response, I rewrote the splitting function in the class to be more flexible, calling the new class TimeSeriesSplitImproved (subclassed from TimeSeriesSplit).

The code for my class is below. I may issue a pull request to Scikit Learn’s Github repository if I ever get the time/courage/know-how.

We would use the indices provided by the generator created by the split() method to subset pandas DataFrames that contain stock data and serve as data feeds to a backtrader Cerebro object.

The first thing I will do is pick up where I left off in my introduction to backtrader. I’m implementing a simple moving average crossover (SMAC) strategy, and I judge a strategy’s performance by how much the final account has grown. The following code is slightly modified from my earlier post, both to reflect growing knowledge on my part and to prepare for what’s ahead.

I now re-run the strategy, this time using data from pandas DataFrames instead of managing downloading Yahoo! Finance data with backtrader. Unfortunately, we can no longer download Yahoo! Finance data using the DataReader from pandas-datareader. I will use Google data instead. Google adjusts prices for splits, but not dividends; we will need to make due for now. 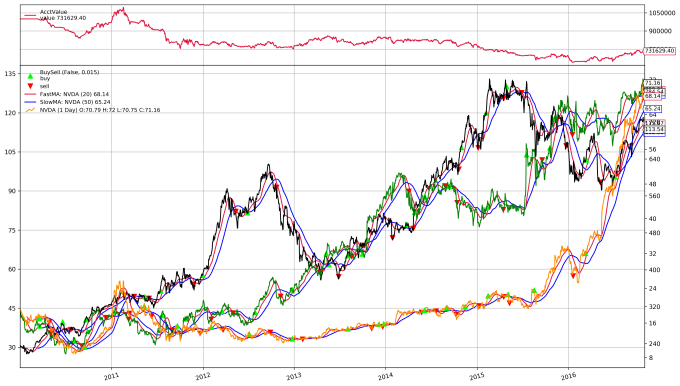 These splits are then used as the indices in the walk-forward analysis. I loop through all training/testing combinations, optimizing on the training set then applying the strategy with the best-performing parameters to the test set. The training and testing sets are obtained simply by subsetting the pandas DataFrames with the appropriate indices.

I organize the results of the optimization in a DataFrame for presentation and analysis. This is all done below. (On my computer this loop took hours to complete.)

This analysis says that when taken out-of-sample, optimized strategies perform somewhere between barely any gain and catastrophic loss (with the two strategies at the end apparently not producing any trades in the out-of-sample periods). Clearly optimization leads only to overfitting that barely produces a profit at best, and lights a bonfire with your cash at worst.

What I believe the walk.forward() function in quantstrat does is simulate a strategy that periodically re-optimizes itself. Having obtained the “optimal” parameters over certain periods above, we can simulate such a strategy as quantstrat does. This is done in the SMACWalkForward strategy below.

The strategy takes in more inputs, including the starting/ending dates for every period, and all the fast/slow parameters for the moving averages, each for its respective period. The strategy will apply different fast/slow moving average windows over the different periods. These parameters are not optional; there is no default here. What we will see in the end is how a strategy that periodically re-optimizes itself performs.

Interestingly, trades happen after August 2015 when the earlier walk-forward analysis indicates no trades during this time, but notice that the trades occur during what would be the 100-day moving average’s “warm-up” period. Since all the moving-average indicators are declared at the initialization of the strategy, each one “warms-up” at the same time. This was not the case before; lots of data was lost to the “warm-up” period for every training/testing set. This highlights a flaw in my earlier analysis; I considered moving average combinations that were large relative to the periods being considered, giving them few opportunities to launch trades. Realistically, since data for these companies extends back for years, we would not have to worry about warm-up periods since we can get enough data to start the moving averages whenever we want. This means that the strategy below is actually more realistic than the walk-forward analysis done above. Correcting this is possible (allow larger slices or extend the test sets so all indicators are warmed up on day one) but I will not concern myself with that issue now. The fact I was able to get this far feels miraculous enough.

Notice that allowing for multiple periods in the strategy is handled similarly to how we handled multiple symbols; we index each combination of strategy and period with dictionaries. Then, when we are performing the backtest, we determine which period we currently are in, and depending on the result we may use different indicators.

Now let’s run this strategy and see the plot.

As the earlier walk-forward analysis suggested, our optimization procedure is a great way to lose money fast. Its propensity to overfit doesn’t lead to profits; it leads to losses. Our account is about 68% of its original value. We’re better off abandoning this strategy and looking for something else.

I sometimes listen to Chat with Traders, a trading podcast where the host interviews veteran traders. Some of the traders he invites on his show discuss optimization with an audible smirk, telling a similar story of an unsuspecting novice setting up a SMAC strategy, optimizing the fast and slow moving average windows, see good results in a backtest, apply the optimized strategy to future data, and fail to replicate their earlier stellar results. We have seen that phenomenon here, and I have demonstrated one way to guard against this type of overfitting.

Walk-forward analysis can be used to get a sense for what out-of-sample performance may look like while you are developing a strategy, but alone it is not enough to guard against overfitting. Here are some other things you may do:

Notice that the above recommendations seem to call for discipline on the practitioner’s part. Overfitting is tempting. The Siren’s song of overfit profits may lead you to be dead on the rocks. You should know when you are overfitting, and fight the biases that lead to it.

I have created a video course that Packt Publishing will be publishing later this month, entitled Unpacking NumPy and Pandas, the first volume in a four-volume set of video courses entitled, Taming Data with Python; Excelling as a Data Analyst. This course covers the basics of setting up a Python environment for data analysis with Anaconda, using Jupyter notebooks, and using NumPy and pandas. If you are starting out using Python for data analysis or know someone who is, please consider buying my course or at least spreading the word about it. You can buy the course directly or purchase a subscription to Mapt and watch it there (when it becomes available).

If you like my blog and would like to support it, spread the word (if not get a copy yourself)! Also, stay tuned for future courses I publish with Packt at the Video Courses section of my site.